Electric motors are devices that convert electrical energy into kinetic energy of rotation, by the flow of electric currents through magnetic fields.
Electric motors of various types are extremely common objects. It has been estimated that the average affluent household in the Western World utilizes about 60 electric motors, excluding those in the family cars!
Electric motors are basically of two types, those working off direct current, and those working off alternating current.
The principle that a current flowing through a conductor which is placed in a magnetic field results in a mechanical effect, that is the conductor experiences a force, is exploited in electric motors. Note that heat is also produced, so there is never a 100% conversion of electrical energy into mechanical energy.
In its most basic form, an electric motor consists of a rectangular coil of in

sulated wire, which makes up the ARMATURE, or moving part of the motor. The COMMUTATOR acts as a current-reversing switch after every half-revolution of the coil.
The brushes serve to make contact between the battery and the rotating commutator, which is mounted on an insulated shaft, not shown in the picture.

When the current is switched on, it flows in opposite directions along the two segments of the coil, generating equal but opposite thrusts, that form a turning couple or torque. This tends to rotate the coil (anticlockwise in the diagram shown above at the left, which shows the combination of current, field and thrust, F.) The momentum of the coil carries it past the point where the current is short-circuited, and beyond that point, the current is reversed in the coil, but the thrusts remain in the same direction, ensuring the continuous rotation of the coil while the current is flowing. The diagram above right shows how Fleming's left-hand rule may be applied to establish the direction of the force, with reference to the wire labelled B, where the current comes out of the plane of the screen. If the direction of the current, or if the poles of the magnet, are reversed, rotation will proceed in the opposite direction. 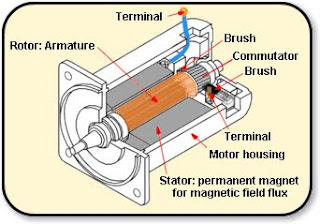 Simple practical direct current (D.C.) motors can have a permanent magnet to supply the flux. This forms part of the stator of the motor. An armature, wound with many coils of wire, is the rotor. In practice, the motor is designed with a large number of coils, resulting in a smooth rotary motion.
The generator:
When a coil of conducting wire is rotated in a magnetic field, electromagnetic induction res 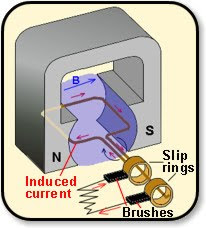 ults in an induced current flowing through the loop. In this way, mechanical energy is converted to electrical energy. The device is called a GENERATOR or DYNAMO .
The generator will produce an electromotive force that will vary sinusoidally with the angle made by the coil and the applied field (this is discussed in detail in the topic on Alternating Currents). Thus the direction of the current will vary , and the current so produced is called an ALTERNATING CURRENT. A better name for the device is ALTERNATOR.

If, instead of slip rings, a commutator is used, direct currents may be generated. The current produced by a single coil produces a direct current, in that the polariry of the emf that is generated remains the same throughout the cycles of revolution. The value of the emf does however change cyclically, as shown in the diagram on the left. Such a situation gives rise to a so-called RIPPLE-CURRENT.
A smoothing out of the ripples is obtained by having two or more coils.
Note that this is analogous to an electric motor: the motor converts electrical energy into mechanical energy, while the generator converts mechanical energy into electrical energy. Generators DO NOT create electricity out of nothing!